My Caribbean holiday has come to an end, sigh. I’m back in freezing-cold Toledo, suffering from a severe attack of the post-holiday blues.

I usually feel a bit lacklustre after a trip, that’s nothing new, but this time I’m more deflated than usual. The episode has made me realise just how much I miss my friends Vicky and Ian. Vicky is a long-standing, close friends of mine. She was my landlady and housemate for many years in London, and when she got married, she and her husband Ian bought a house three minutes away from me, so we continued to see a lot of each other. In 2011, the two of them decided to move to Key West. This provided the impetus for me to leave for Spain, which I’d been wanting to do for a long time anyway.

During my visit, Vicky and Ian were running a concerted campaign for me to come and live in KW. Their houseboat has a self-contained apartment on the lower deck, which would be ideal for me.

I am seriously tempted to take them up on it. Well, just to clarify, we’re talking about a temporary ‘move’ here, i.e. for a few months, rather than a permanent arrangement.

Here are the pros:

1. Instead of words, I give you this:

2. Spending time with Vicky and Ian, needless to say.
3. Vicky’s glorious cooking (in one of her many professional lives, she was once a chef.)
4. KW is very convenient. For example, everything is within cyclable distance, it’s one of the very few towns in the US which is perfectly adapted for cyclists. An important consideration for me, since I don’t drive.
5. Key West is very international, which I like, and this includes a large Spanish-speaking community.

1. The organisational hassle of living in two places. My official residence would continue to be Spain.

2. Blasted visa issues… Ideally, I’d like to be in KW for six months. I can stay in the US for 90-days on a standard tourist visa, that shouldn’t be a problem, but I may run into difficulties when I try to re-enter the US for the second time shortly after the previous three-month-stint. I’ve no desire to settle in the US permanently, Europe is home, but US immigration officials have the reputation of being a suspicious lot.

Time-frame wise, I’m thinking early 2014. It’s quite possible that I’ll be spending the last three months of 2013 in Brazil. A friend of mine is really keen for us to go there together, ostensibly to learn Brazilian Portuguese (but mainly to have a rollickin’ good time, lol), and I’m definitely game, but nothing’s fixed yet. 2014 is also the last year of Ian’s current working visa. He’s highly likely to extend it, but you never know where visa issues are concerned, and I wouldn’t want to miss out on a great opportunity like this by leaving it too late. 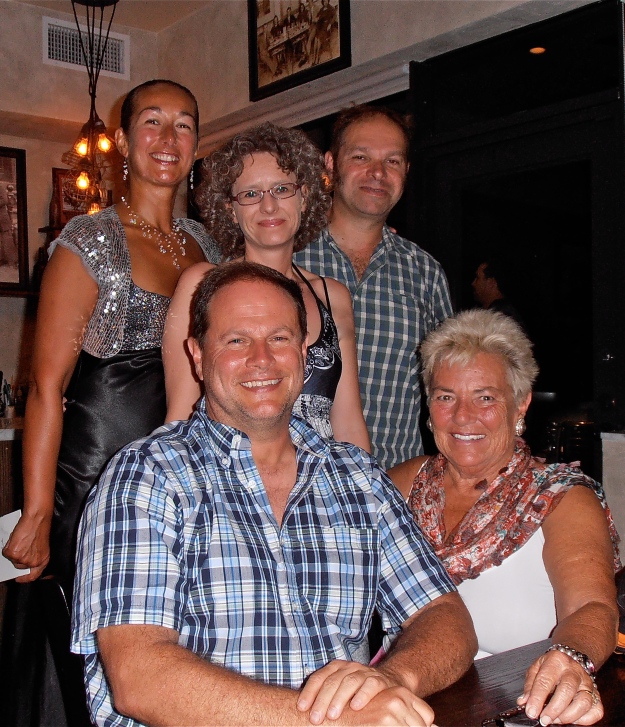 Pic taken by a kind waitress after Vicky’s birthday meal last week. Vicky and Ian at the back, two of their friends (Graham and Frankie) in front, me in the middle.