On my arrival in Spain, I noticed that many local shops featured the words “Frutos Secos”, which, directly translated, means ‘dried fruit’, on their signage. It did make me wonder whether dried fruit was the equivalent of hot cakes in Spain, or why else would a little shop keeper spend his hard earned money on advertising this on his (surely quite expensive) shop sign? Here’s a corner shop close to my house in Toledo: 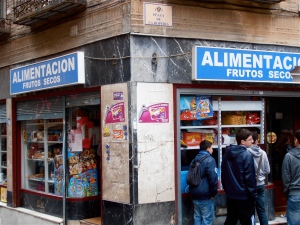 Whatch out! This is the most expensive corner shop in the Western hemisphere. Do not go in there. Ever. Not even for an emergency pack of chewing gum. You’ll come out with the shirt ripped off your bleedin’ back, missing an arm and a leg. (O un riñon, si eres español.)

But my bafflement over dried fruits’ powers of customer attraction isn’t really what I was going to talk about. (Besides, I’ve since figured out that “Frutos Secos” is a generic term for this kind or establishment, to which, in the UK, we’d refer to as a “corner shop”.) So, as I discovered a few months down the line, frutos secos are not what an English (or a German) speaker would naturally assume them to be, i.e. this stuff: 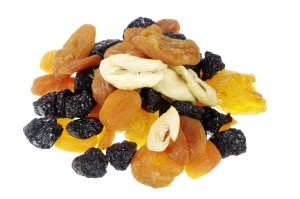 No, for a Spanish speaker, frutos secos is this:

Dried fruit, it turns out, is “fruta deshidratada”, which, at least, is not totally counter-intuitive.

The conundrum was not quite resolved, however. There was yet another twist in store for me.

If frutos secos means nuts, I wondered, I  what the hell are “nueces”?? I I took that to signify nuts. Nuez/Nueces sounds just like nut/nuts and Nuss/Nüsse in English and German, respectively.

Well, it turns out that nueces, in fact, are walnuts, and not nuts in general. Up to that point, I’d been referring to all kinds of nuts as nueces. Ooops.

As to the difference between fruto and fruta: Fruta is what you will find in a fruit bowl, while fruto is a more general term describing not only nuts and inedible fruits produced by all manner of plants, but also the “fruits” of one’s labours (el fruto de tus labores), the fruit of Mary’s blessed womb aka Jesus (el fruto de tu vientre), etc.

Have you been using a word in another language incorrectly for ages, only to discover much later that it was, in fact, one of those treacherous ‘false friends’?

78 thoughts on “Language Confusion Buster: ‘Dried Fruit’ Is Not What You May Think It Is”