My trip to Lisbon over Christmas was only my second time in a Portuguese speaking country. I spent a couple of weeks in Madeira about seven years ago, but I didn’t know a word of Portuguese back then, and my knowledge of Spanish, at that point, was pitiful. In short, I understood sod all and was 100% reliant on English.

This time, though, it was a different story. My Portuguese is still pretty basic where speaking and listening comprehension are concerned, but advanced in terms of reading comprehension, because I’m fluent in Spanish by now.

Surprisingly, it felt like there was no real language barrier at all, at least not for the purpose of touristy pursuits. My Portuguese stretches far enough to ask for directions, opening hours, prices, to order food, communicate with bus and taxi drivers etc.

For any more complex issues, the good people of Lisbon (at least those I encountered) understood Spanish perfectly well, and they had no qualms about replying to me in Spanish. I was quite amazed by this. In Spain, hardly anyone speaks Portuguese, despite so much shared history and Portugal being a neighbouring country. The Portuguese do not dub foreign films, which may be one of the reasons why  English is also widely spoken. However, as I was in the company of a Spanish friend, I hardly used any English at all during that week. 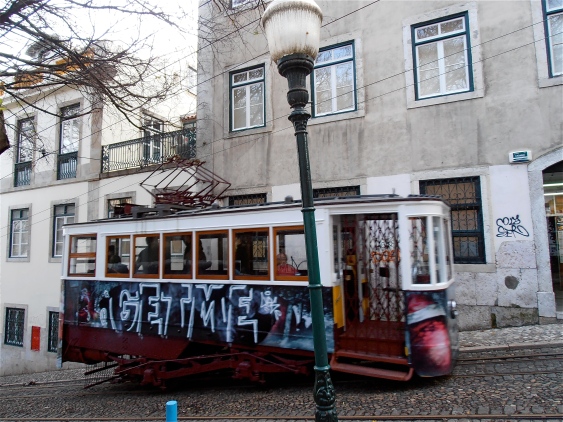 …and they totally did 🙂

Portuguese and Spanish vocabulary overlap to a significant extent, and so, if you speak Spanish, it will get you quite far when it comes to deciphering written information. However, Portuguese has a habit of contracting articles and prepositions, which is a great cause of confusion to the uninitiated, even if they do happen to speak another closely-related Romance language like Spanish or Italian. But once you’ve cracked the contractions, reading Portuguese is (almost) plain sailing.

To briefly illustrate: the ubiquitous Portuguese word “no” does not mean “no” as it does in Spanish (and in English), but it is a contraction of the preposition “em” (in/on/at) and the masculine definite article “o”. The word “pelo”, which means “hair” in Spanish 😉 is a contraction of the preposition “por” (by/through/for) and “o”. So, knowing how Portuguese contractions work – and you will find these peppered throughout every sentence – instantly unlocks a whole new dimension of comprehension.

The language aspect of my trip was certainly very satisfying. I was assimilating new vocabulary quite effortlessly just by reading the signs and advertising around me, and at no point did I feel uncomfortable or panicky when the need to communicate arose. (I do get a bit anxious about these things… silly, I know, but that’s how it is).

Listening to people’s conversations in the street and on public transport was much more tricky, though. Spoken Portuguese (and especially that of Portugal) is difficult to understand, as pronunciation differs markedly from what you see in writing. Thanks to my patient Portuguese teacher back home, who is from Lisbon, I was able to catch bits, entire sentences on occasions, but I can’t say that I was able to follow in detail what folk were chattering on about. Not that I expected to, at this stage. I was reminded that I had the very same problem with my Spanish a couple of years ago, and it made me realise how far I’ve come since then.

Spanish and Portuguese may be lexically very similar, but there are plenty of “false friends: “Borrachas”, which means rubber/eraser in English, are “drunk women” to a Spanish speaker 😉

55 thoughts on “How Did I Get On With My Portuguese In Portugal?”