Apple strudel. It’s a simple concept. You roll out some pastry as finely as you possibly can (it may be flaky pastry or non-flaky strudel pastry, we don’t want to be too fussy here), you spoon on the apple filling, and then you roll it up into a foot-long tube shape. In the oven it goes, and plated up, a decent slice should look something like this:

“Strudel” is a German word that can mean any of following things: whirl, swirl, whorl, whirlpool, vortex, eddy. If you look at the pattern of a strudel slice in cross-section, it’s quite obvious why this delectable dessert item bears this name.

There is a point to all of this pastry preamble, as you’ll see in just a tick. The actual story goes like this:

On Sunday, Maria and I were out and about in Madrid, desperately hunting down some exciting cake after a fabulous luncheon (more on this in a subsequent post). Now, Maria isn’t normally all that much into sweet stuff, but *somebody* has been a very bad influence on her…

Eventually, we located a promising café. It happened to have apple strudel on the menu. As you can probably imagine, I was as surprised as I was delighted, and promptly ordered it. But then, this arrived: 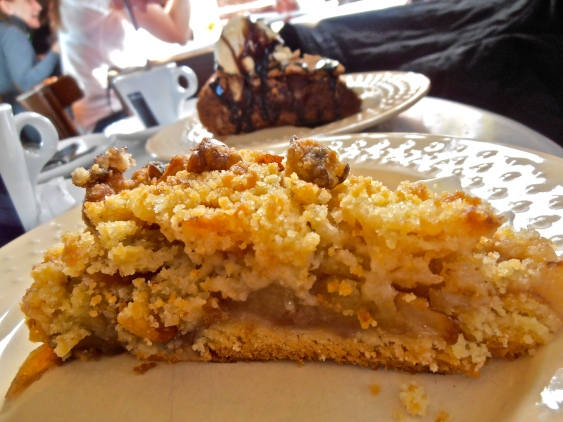 Exhibit A: Does this look like strudel to you???

You don’t need to have an advanced patisserie degree to know that this ain’t no strudel, this is streusel. Apple streusel cake (Apfelstreuselkuchen), to be exact. “Streusel” comes from the German verb “streuen”, which means, of course, to “strew” or “sprinkle”.

The evidence speaks for itself: This thing the waitress shoved under my disbelieving eyes and flaring nostrils was all streuselly and not even a bit strudelly.

Granted, streusel and strudel have a fair few letters in common, but so do duck and dick. Not at all the same thing.

I was getting myself ready to stomp into the kitchen and give the chef’s streusels a bloody good strudelling, but gluttony got the better of me. Before the forensics team had any chance of bagging the evidence, my fork had invaded the crime scene, and a great big chunk of the offending article was making its way down my gullet.

And… it turned out to be a really fine piece of streusel, dammit!!!

Got any pastry impostor stories you care to share…? Or other menu items that were sold as one thing, but turned out to be something else entirely?

[Here’s a pic of my favourite kind of streusel cake 🙂 ]

52 thoughts on “A Cake Rant: Strudelgate”