Being totally food obsessed, I’ve long been meaning to concoct a post on German phrases connected to food and drink. As I started compiling them, it struck me that they had one thing in common: they are all depreciative.

I’m not sure what that says about German food culture… but let’s not fixate on that. Instead, let me serve you up a fabulous selection of wholesome German staples, replete with sausages, beer, sauerkraut, mustard and cheese, and show you how to deploy them to put any Teutonic blogger – or commenter! – in their place.

Das ist mir Wurst!
Probably the best translation for this phrase is “it’s all sausage to me!”. What it means is that you just don’t care, that you don’t give a rat’s arse about whatever. Very handy on the interwebs, that one…

Quite recently, this phrase made a quick little dash through the European media. When Austrian performer Tom Neuwirth, who won the Eurovision Song Contest a couple of months ago in the guise of his gender-bending alter-ego Conchita Wurst, was asked about his eclectic choice of stage name, he explained that it was based on the German “Wurst” expression, because, whether boy or girl, it was all the same to him.

OK… he may have been just a smidgen disingenuous (and quite witty) here, because we all know what pops into everyone’s head at the mere mention of the word “sausage”, right?! And on top of that, “Conchita”, which Neuwirth claims he borrowed from a Cuban friend, while being a fairly common first name in the Hispanic world, has a saucy double meaning: “Pussy”. 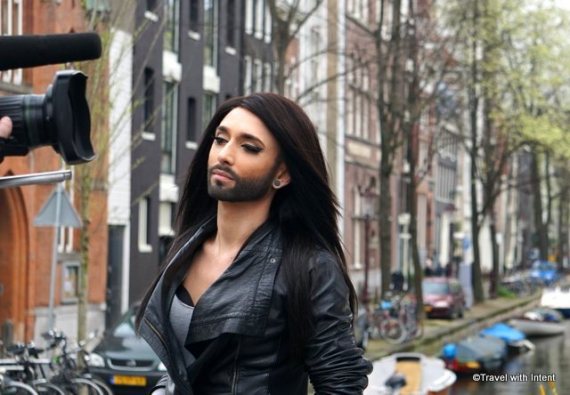 Das ist nicht mein Bier
“This is not my beer” brings to mind the English expression “It’s not my cup of tea”. However, the meaning is not the same. If a German says that something is not his beer, he’s telling you that, whatever it is, it’s just not his problem. A nifty little phrase, I think, for dissing an irrelevant comment that has nothing to do with a post, and everything to do with the commenter’s own agenda.

The Polish have, I believe, put it like this: “Not my circus, not my monkeys”.

Jemandem das Kraut ausschütten
When you “spill someone’s cabbage”, then something you said or did has seriously pissed them off. Maybe you failed to remove your sock fluff from the apartment block’s communal dryer? Played your antique MC Hammer CD 15 decibels above the permitted noise emission level at 9:25 on a Sunday morning? And no, this won’t just blow over. Germans know how to hold a grudge. I’m afraid, you’ll have to bake a strudel or something to make amends.

What strikes me is that a great number of bloggers and commenters are not only experts in this field, but they are positively lying in wait for somebody to offend them! For some, their cyber success is entirely based on this…erm… “skill”. Luckily, they’ve not found me yet…

Before moving onto the next culinary gem, let’s dwell, just for a minute, on the word “Kraut”. It’s the Brits’ favourite pet name for the Germans, but I’m quite convinced that the majority doesn’t actually know that “Kraut” means “cabbage”.

For those of you ol… mature enough to remember, Germany had a chancellor named Helmut Kohl in the 1980’s (see pic below). “Kohl” is another word for cabbage. Now, if that’s not fodder for a jolly good joke, I don’t know what is, but I never came across any chuckles in the British press about the Chieftain of the Krauts being called “Kraut”. Or did I miss something there…? 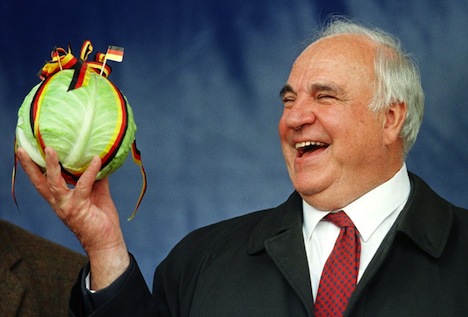 OK… looks like somebody, at least, did get the joke…

I trust that some of you will have tried “Sauerkraut”, a type of pickled cabbage that serves as the most traditional accompaniment of German pork sausages.  The term, which the nickname “Kraut” was originally derived from, literally means “sour cabbage”.

What has long baffled me is that far more people seem to be familiar with the French term “choucroute”, which is but a screwed up French way of mispronouncing the original German word. I can’t actually get this aberration over my lips, try as I might. And neither should you. I am hereby launching my campaign to re-instate “Sauerkraut” as the only correct way of referring to, well, Sauerkraut! [Note that the “au”, which features twice, should be pronounced like the “ow” in “chowder”, or, for that matter, the “ou” in “sour”. It’s as simple as that.]

Seinen Senf dazugeben
This one’s very important. In fact, any self-respecting hater or troll is an expert on this – it’s their raison d’être.  The expression, which translates as “to add one’s mustard”, means to give one’s opinion, though the implication is that nobody asked for it in the first place. Adding one’s mustard has always been a cherished human pastime, but the internet has taken things to new heights. And lows.

As an aside (ha!), Senf is a quintessential German condiment. Many kinds of sausages and meat products simply CANNOT be eaten without mustard. Germany is home to hundreds… what am I saying… THOUSANDS of different types. And we take our mustard matching much more seriously than picking the right wine.

So ein Käse!
Another staple item in the hater’s toolbox. If you want to deride a German blogger’s reasoning abilities, or just trash a post with one crisp little phrase, you can do so by poo-pooing their precious writings as “cheese”.

This should be of particular interest to Spanish speakers, because when my Spanish friends refer to someone as “being like a cheese” (“¡está como un queso!”), they will usually be drooling over a hunky guy. So, amigas (y amigos), if you’re trying to pull a German, it might be best to steer clear of cheesy pick-up lines.

Du gehst mir total auf den Keks!
“You are totally getting on my nerves!” “Keks” means biscuit or cookie. There’s another, slightly less savoury version of this, where the biscuit is replaced with “Sack”. Sack means sack in both German and English, but it’s also a German colloquial term for scrotum. You get the picture…

Kalter Kaffee
“Cold coffee” is old news. So, when a blogger bores the pants off you with trite statements or an in-depth analysis of last week’s headlines, you can express your dismay by pouring cold coffee into their comment box.

Not what you were expecting? It’s a tough life…!

Incidentally, Germans do like their coffee cold, especially in the summer, when we drink “Eiskaffee”. But watch out: Eiskaffee is NOT iced coffee. Instead of a refreshing coffee slushie, what you’ll get is a caloric missile of coffee laced with at least two scoops of ice cream and a whipped cream & chocolate sauce tower on top. There may even be a Keks or two sticking out. If you’re surly enough to send it back, you’ll run into serious risk of spilling the waiter’s cabbage…

[If you want to expand your repertoire of choice German phrases even further, you might enjoy this: The German National Character Explained In Three Culturally Loaded Phrases]