For as long as I can remember, I’ve been fascinated by islands, archipelagos and peninsulas. Having been born in mid-continent, a thousand miles from the sea, to parents who were disinclined to travel any farther than the nearest cigarette dispenser, lonely outcrops of lands encircled by thrashing seas seemed just as mysterious and (un)real to me as the junglescapes of the Planet of the Apes.

Strange things happen on islands that nobody can explain, while, at the same time, they explain everything. Who erected those giant stone statues on the Easter Islands? And had Darwin not stopped by the Galapagos and set his beady eyes on a bunch of finches, he’d probably never have come up with the concept of evolution.

When humans settle on islands, things become even more interesting. Their identities are rapidly re-shaped by island life. I’ve perpetually been left confounded, for example, by the firmly held belief of the British, that they are, in fact, not European.

According to Brit gospel, those Europeans inhabiting “The Continent” are a species afflicted either by a lamentable sense of humour deficiency, or by highly questionable timekeeping skills. And sometimes, both. Said Continentals, who try to compensate for their languages’ inherent lack of precision by means of florid gesticulations, have absolutely nothing whatsoever to do with the British island breed, whose forefathers sprouted from spores that fell from the moral backbone of the heavens onto these mist-shrouded isles.

Applying the island rationale, when you ask a Brit whether Sardinians or Majorcans weren’t European either, or whether Japanese people ought to be considered exclusively Japanese and not Asian as well, you will earn yourself but a blank stare. With a dash of benevolent contempt, if you’re lucky.

Britons are, quite simply, more unique than anyone else. Incidentally, British citizens of Indian or Chinese heritage can both be British and Asian, but those pallid specimens descended from, let’s say, Norman conquerors and Danish seafarers, may be English and British, but definitely NOT European. Such is the mind-warping power of islands.

I’ve an interminable list of insular destinations I desperately want to visit, including Tristan da Cunha, Svalbard, Kamchatka, the Maldives, the Falklands, the Faroe Islands, Christmas Island… I could go on… but seeing that most of these are way beyond my paltry travel budget, I have to take what I can when the opportunity presents itself.

So, a few weeks ago, when the Andalucía trip came about, I was delighted – delighted, I tell you! – to discover on Google Maps that Algeciras, the town where Maria and I were going to be staying, was slap bang right next to Gibraltar. 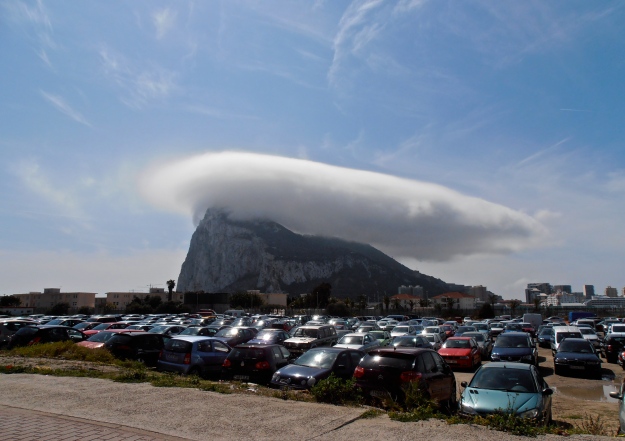 Taken from the car as we were crossing the border. “The Rock” even has its own weather! And just look at that grumbling cloud casting doom and gloom over British territory while the rest of Spain is bathed in resplendent sunshine… what more proof does anyone need that Gibraltar is, in fact, part of the UK!?

Gibraltar, a lump of limestone fused onto the southern tip of Spain, a mere 2.3 square miles with 30,000 people squashed onto it. Gibraltar has been under British administration since 1704, which pisses off the Spanish no end. In the last referendum, held in 2002, 98% of Gibraltarians were adamant that they wanted to remain part of the UK rather than cede to geographic realities. The diplomatic skirmishes between the two nations feature prominently in the news here in Spain, and in the UK as well, of course. 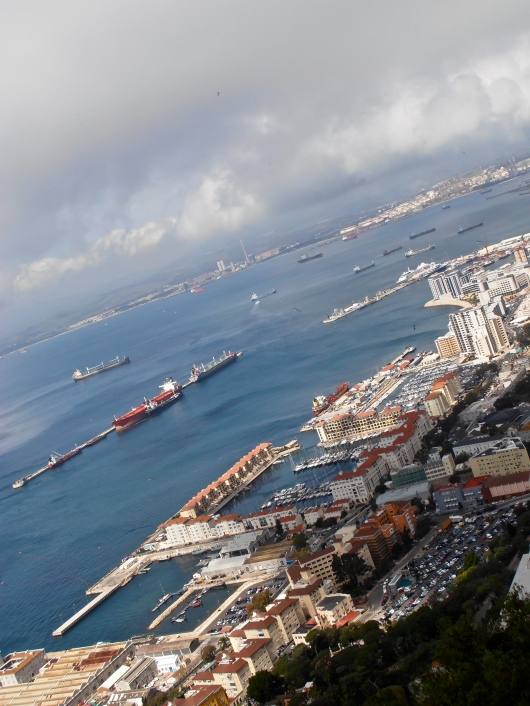 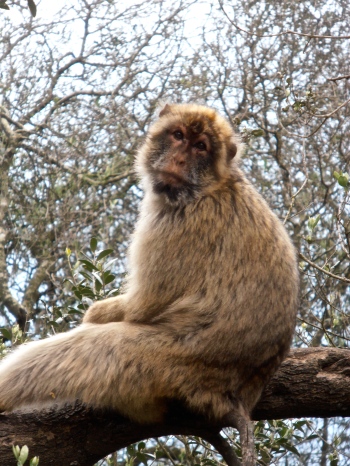 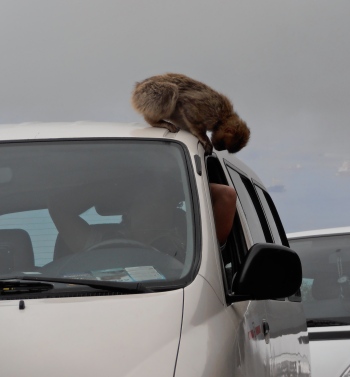 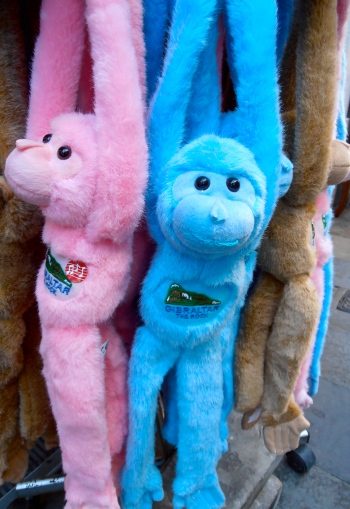 You can even take one home! 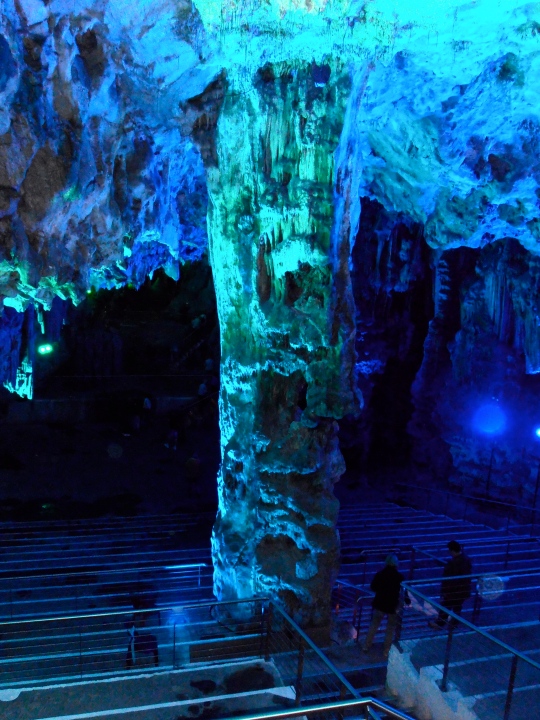 I never realised that Gibraltar’s innards were, in fact, a warren of caves. There’s 150 of them, apparently. St Michael’s cave, 300m above sea level, is like Mother Nature’s giant cathedral. 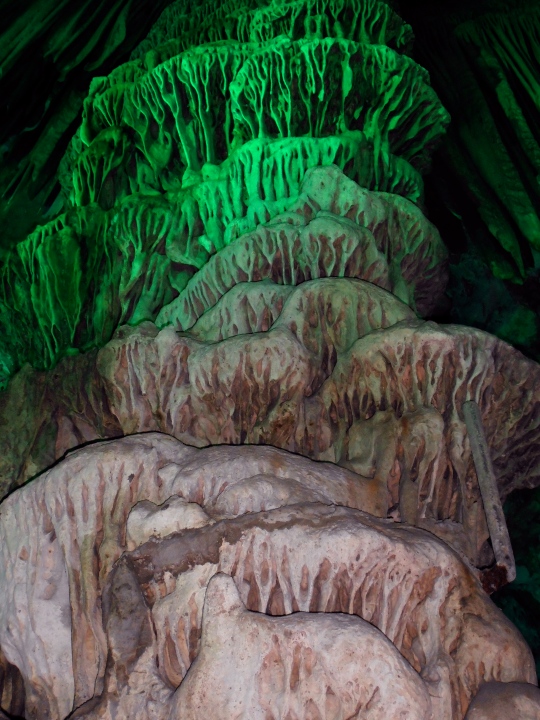 I half expected the Elven King to step down from that… 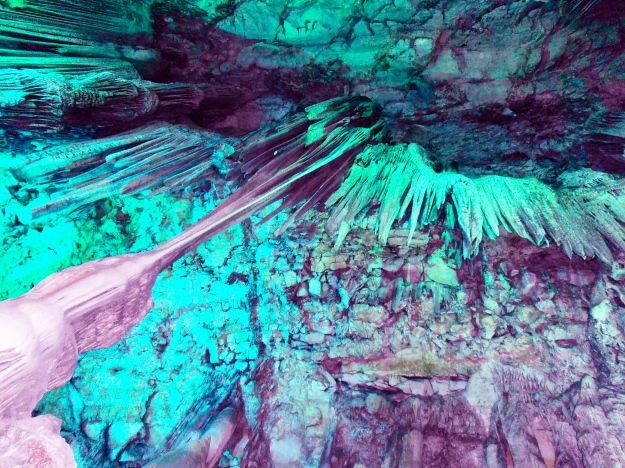 Overhead shot. Best not cough. Those things could pierce your head… 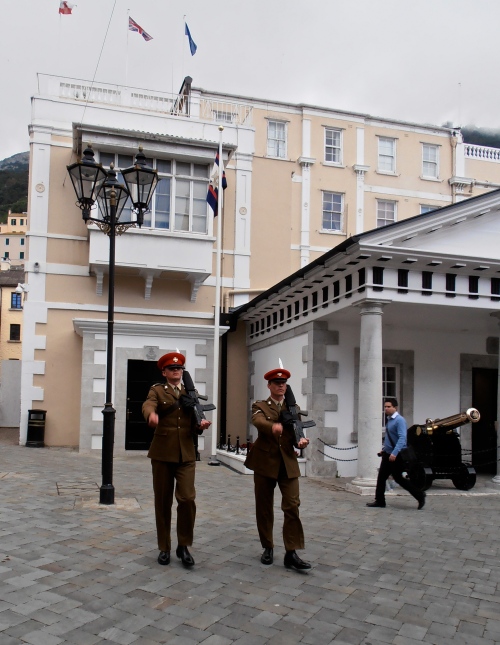 Back in town, we passed by some changing-of-the-guards malarkey. Stiff marching, peering out sternly from underneath slightly-too-big hats, and lots of unintelligible shouting. British tax money well spent. 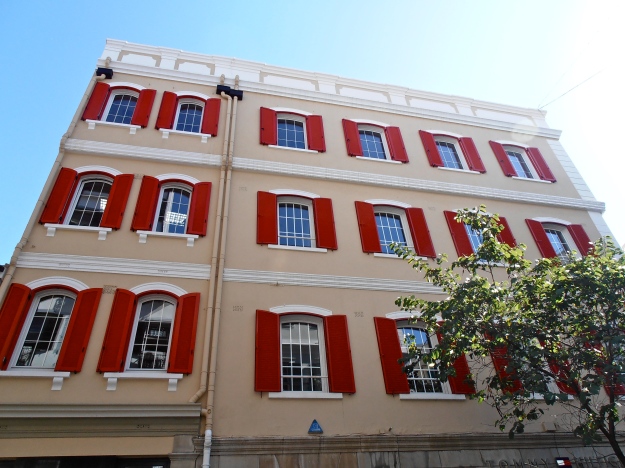 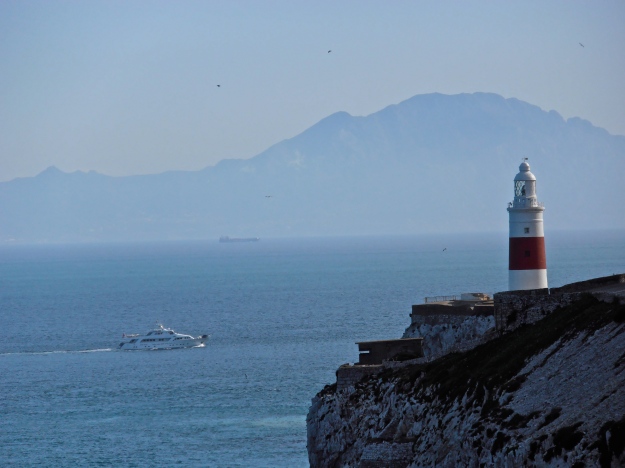 Gibraltar lighthouse, with the African coast in the background.

Predictably, it’s neither fish nor fowl. It sports, of course, plenty of “authentic” pubs on every street, with the requisite British food items on the menu, from toad-in-the hole and beef wellington to chicken tikka massala. Listening to people’s accents, there were plenty of ‘real’ Brits milling through the streets and rummaging behind shops’ counters, but there was also a weird kind of indigenous English being flung about.

There are enough British High Street shops to have made me feel, for a fleeing moment, like I was back in the UK, and I got a bit homesick. I stepped into an M&S, and I may have had a minor orgasm somewhere between the chocolate Easter eggs and the hot cross buns. I also spotted a WH Smith and several UK clothing chains, such as Monsoon. But, to my abject disappointment, there was no Boots! I even asked about it in the Tourist Information office. Shaking of heads all round. But there were, I was told, “plenty other chemists”. I’m sorry, but a British town without a Boots is just inconceivable.

I wasn’t in the least bit disappointed by our trip, and I would certainly not label Gibraltar as “fake” or “boring”. It is what it is: Its own microcosm, a confluence of several worlds and a colourful history that has given rise to a way of life that is, well, quintessentially insular. 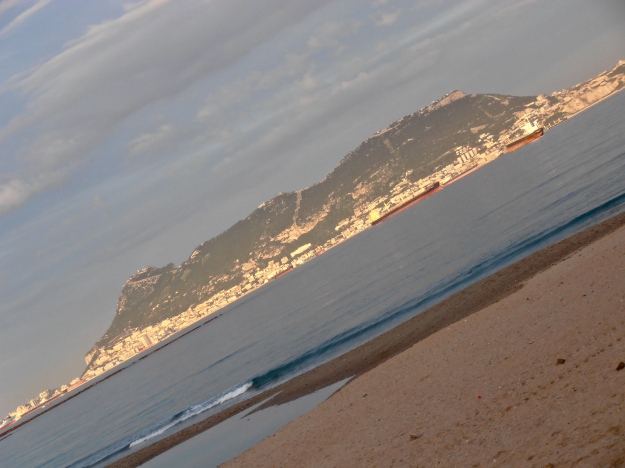 Gibraltar glows in a hazy sunset. Viewed from Algeciras beach.

Taken a couple of weeks ago on Algeciras beach (Andalucía).

This is a place holder, you understand, as I’m still doctoring my Gibraltar post 🙂 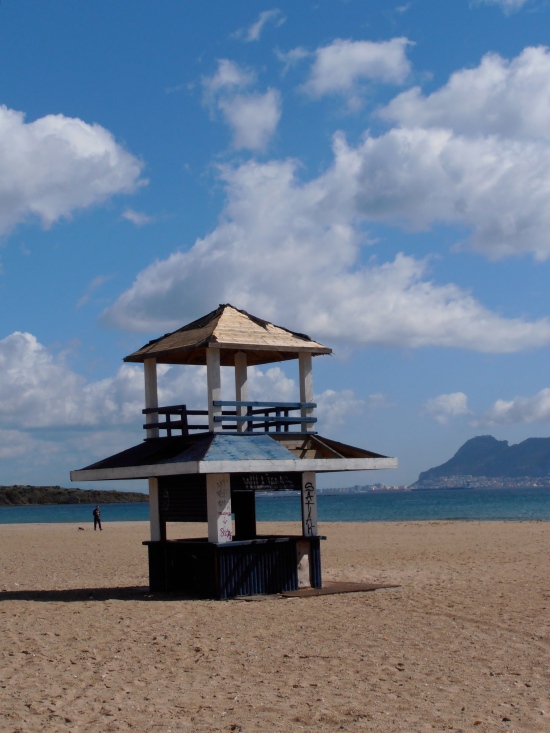 You can make out part of “The Rock” on the right 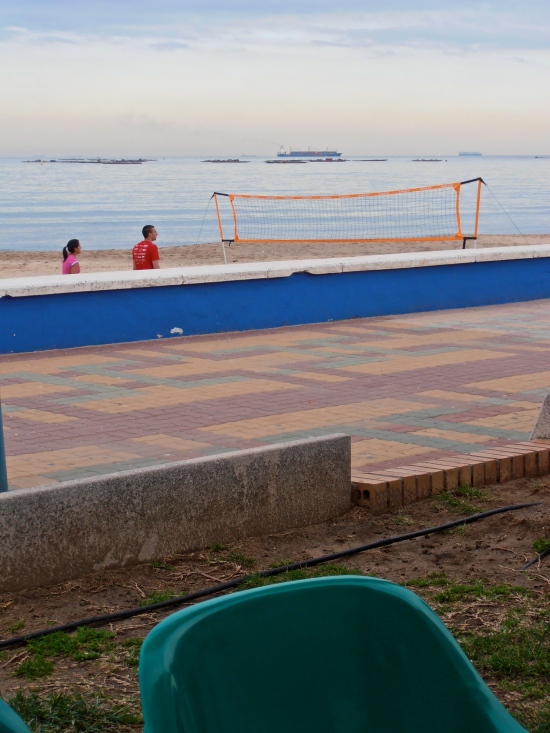 And for an extra splash of colour, a shot taken from a café on Algeciras seafront.

Ever since we got here on Friday night, we’ve been eyeing it up. THAT rock. It’s in groping distance from Algeciras. And we absolutely want to go there.

So, today’s the day. At noon, Maria, her sister Paula and I will head for Gibraltar. I’ve no clear idea what to expect… which is probably best 🙂 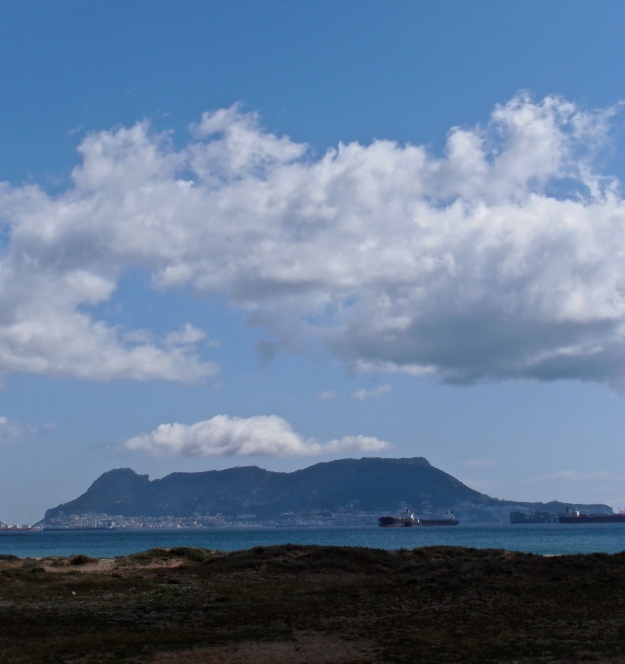 Gibraltar from a beach in Algeciras, where Maria and I are staying. 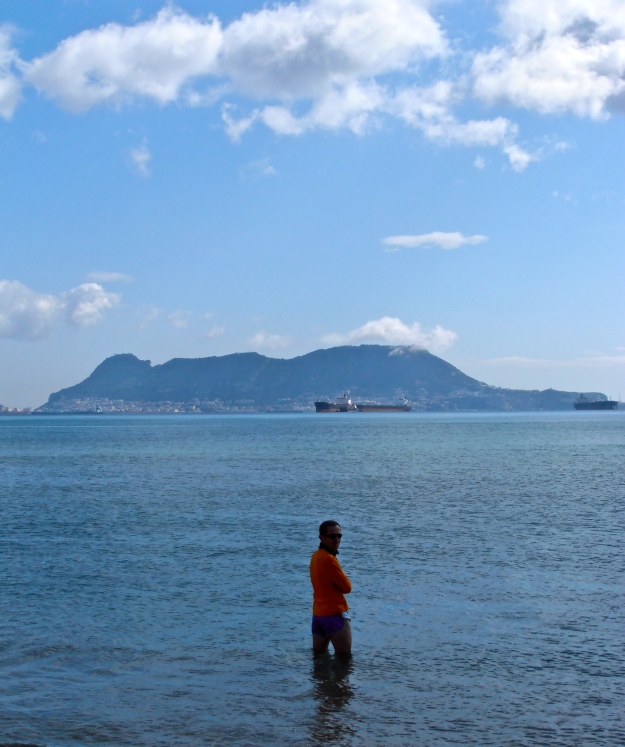 Seems we’re not the only ones wondering about it…