My laptop has developed some kind of motor neurone disease. It starts with mouse paralysis, which then extends to the trackpad and the keyboard. After an unsuccessful repair attempt, which involved a two-week wait, I decided I could not be doing with this. Christmas is looming, and the thought of being stranded in Germany for a couple of weeks without a computer, never mind the money I’d lose by not being able to work from there, is more than I can bear, financially and mentally.

So, today I schlepped all the way to the Apple Store in Madrid. I had thought of everything: My passport (shops in Spain routinely ask for ID at the checkout), my Apple ID, a bag to conceal my purchase. OK, Madrid is not Maputo, and you can call me paranoid, but I don’t want to be drawing the attention of any shadies in the very place where they all hang out: in the heaving centres of capital cities, waiting to lighten the loads of hapless shoppers and unsuspecting tourists.

I was relieved to find that the product I wanted was in stock, as was a type of semi-exotic cable I’d been looking for. But when I tried to pay, card was declined, despite sufficient funds in my account.

It turns out that the one thing I had evidently not thought of was that there might be a daily transaction limit on my card. I’d never tried to make a purchase of well over a thousand bucks before with my Spanish bank card.

The store was better prepared for this than I was, because, apparently, this happens all the time. The nice assistant pointed me to the number to call to get them to up the limit.

My bank, the Santander, has a very affable marketing slogan: “We want to be your bank”. But not on a Sunday, it transpired, when all you can do by phone is to check your balance and block a stolen card. As for anything that’s not automated and requires the input of a human being… forget it!

I had a couple of hours to kill (rather than my bank, which would have given me infinitely more pleasure), so I wandered around town for a bit. 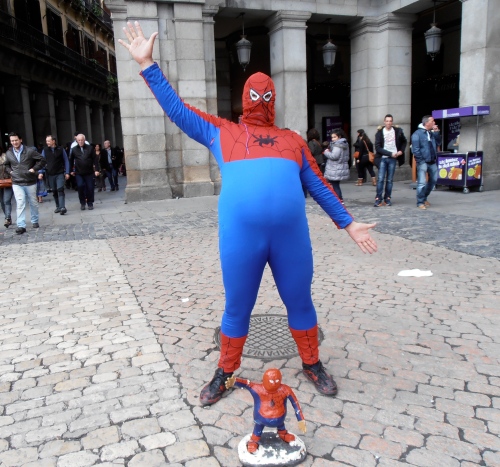 He cheered me up 🙂 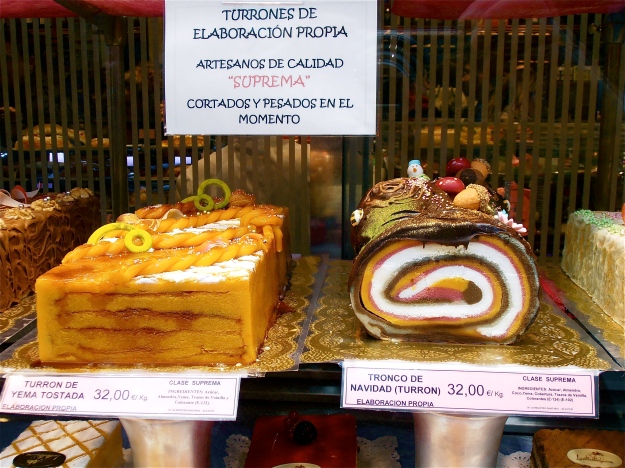 So did a dose of this. It’s six hours later as I type this, and I’m still riding out the sugar high.

A couple more shots from Plaza Mayor, already decked out in its festive seasonal trappings, (using the “drawing” setting on my cheapy camera): 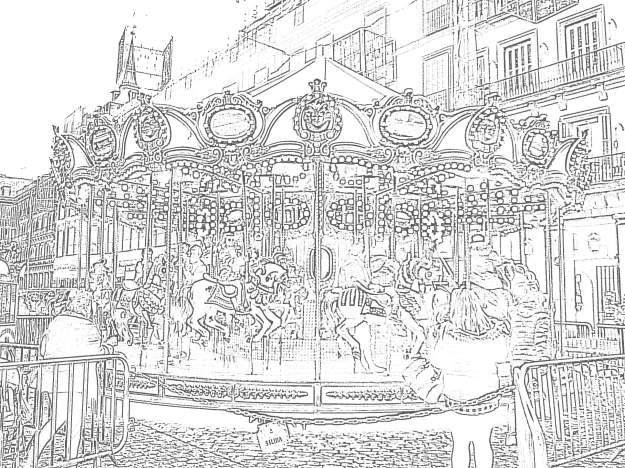 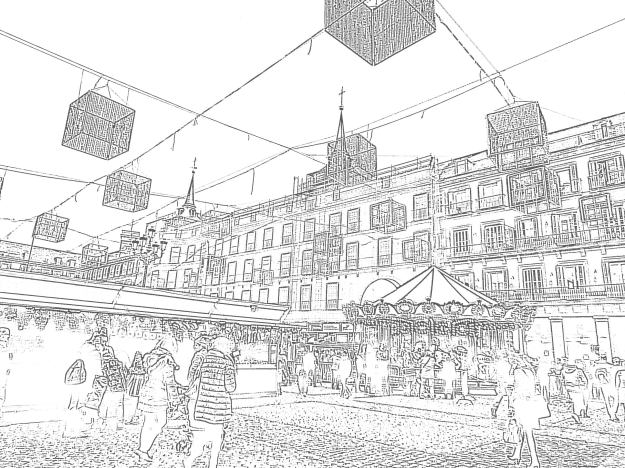 A few months ago, my friend Maria informed me that the National Archaeological Museum had opened its doors again after having been closed for aeons (6 years!) for renovations. And finally, this Friday, we scurried off to Madrid to edify ourselves on a dose of culture.

Everyone loves a perky reception 😉

They let you take photos inside. Since flash is not allowed, the pics are a bit fuzzy, apologies for that. Let’s go straight to the museum’s most glamorous A-lister: 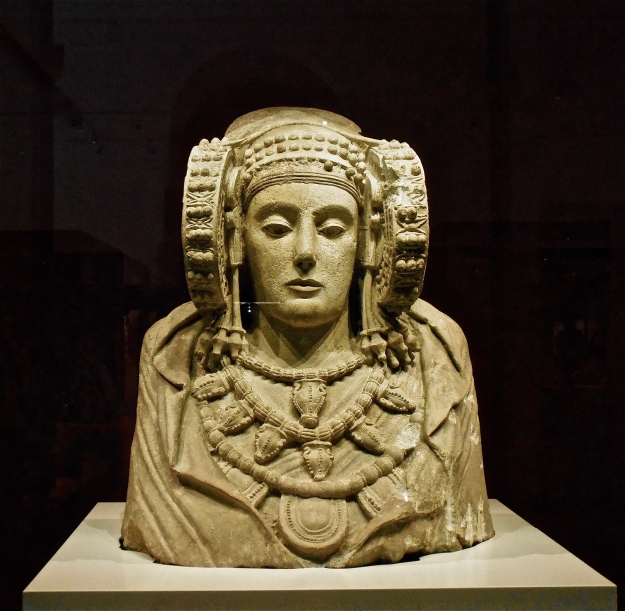 The Lady of Elche (Elche is a town in Valencia, where this beauty was unearthed), believed to date from the 4th century BC

It is rumoured that she was wearing a gold bikini on her (unfortunately still missing) bottom half.

This one’s drawing much admiration from his brethren…

..because he’s the only one who needs a wedge under his pedestal to keep him upright 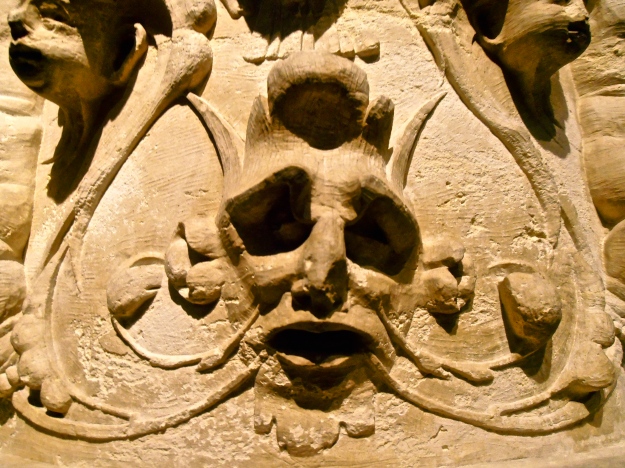 The devil’s in the detail 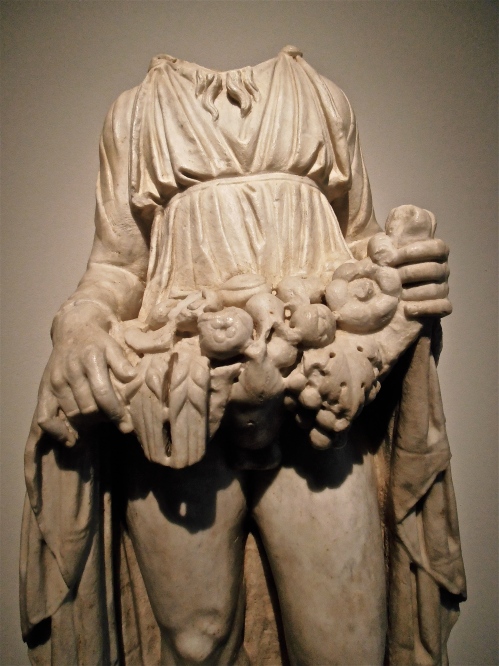 A beautiful maiden bringing some freshly picked fruit along for a picnic…?

Uhm…nope. It’s a frisky fertility god named Priapus with a different kind of proposition… The marble statue dates from the 1st century and turned up (or on?) near Málaga.

Food? Of course there was food! 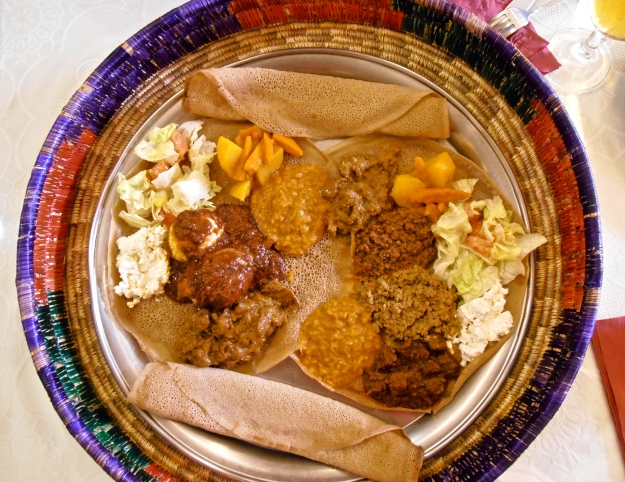 Our Ethiopian lunch 🙂 So pretty. So spicy!

I may be responsible for some of what’s missing there…

On Friday, my friend Maria and I sacrificed yet another perfectly good working day on the altar of freelance rebellion. We went AWOL in Madrid, which entailed some glorious food, a thought-provoking exhibition of photographs taken in 1960’s Barcelona by the legendary Eugeni Forcano, and a peruse of the latest scriptures laid out in The Temple (aka Casa Del Libro, a massive bookshop).

Let’s ogle the food. (I could eat it all over again right now…!) Maria chose a Thai restaurant called Thaidy, where we had a great three-course lunch for a mere €12.50 each. 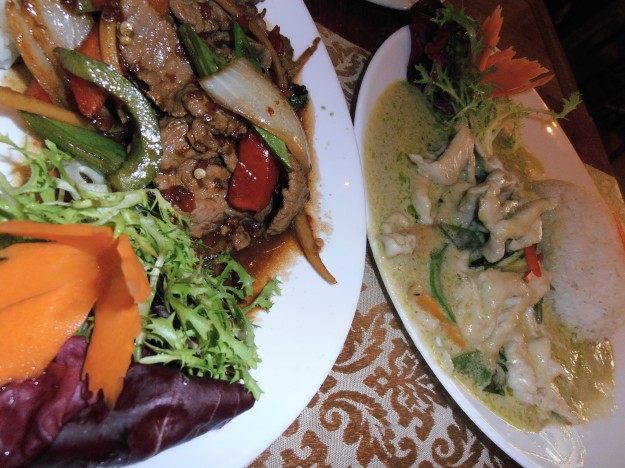 The basil and chilli beef was seriously hot – but that’s what we asked for, and we loved it! The green curry had just a tad too much salt, but it was still enjoyable. 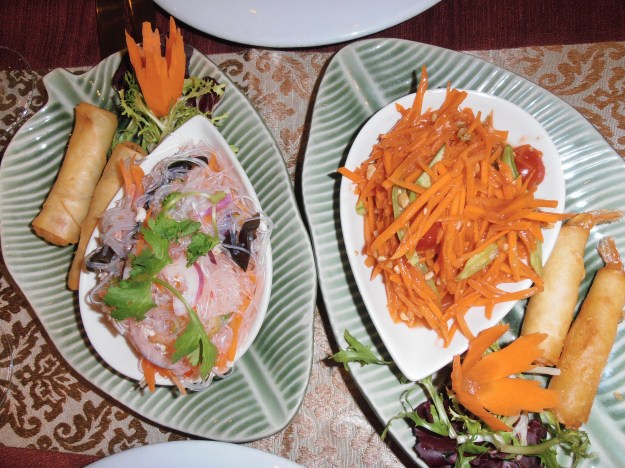 The starters – fresh and tasty 🙂

Those doors are in desperate need of a good clean! As are my own windows at home… erm…

Q: What do two freelancers do on a Tuesday afternoon? A: What they bloody well like!

So, off to Madrid we went, Maria and I, to peruse  the Mitos Del Pop exhibition laid on by the Thyssen-Bornemisza Museum. (Whoever decided on this tongue twister of a name???) 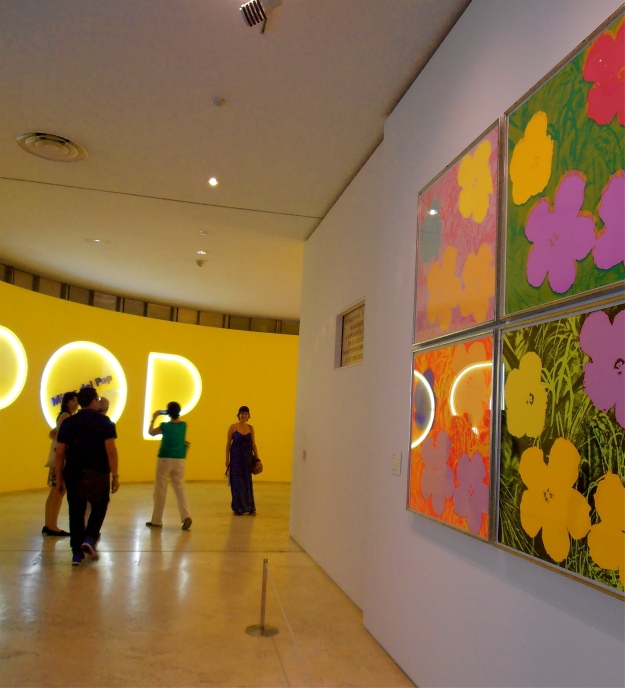 Entrance to the exhibition, with Maria waiting for me to get a move on.

There can be no Pop Art without Soup cans! Photo taken in the Museum shop, not the exhibition itself. And the staff told me off 😦

Let’s move onto the food. We opted for Vietnamese 🙂

“I must say, you do look a bit silly up there…”
“Speak for yourself, Pink Socks!”

“Giving me the silent treatment, huh?!”

I’ve already mentioned in a couple of posts that, a week ago, my friend Maria and I spent the day in Madrid. We meandered through El Rastro for hours, with the sun on our faces and the crowd thronging.

El Rastro is an enormous open air flea/artisan market held every Sunday in a part of town called La Latina. It’s crammed to the rafters with rusty old junk (aka “antiques”), delightful trinkets and arty stuff.

I’ve finally managed to go through the pics, and here’s a selection:

I’d not be surprised if a quite a few of those opened random doors in Toledo! 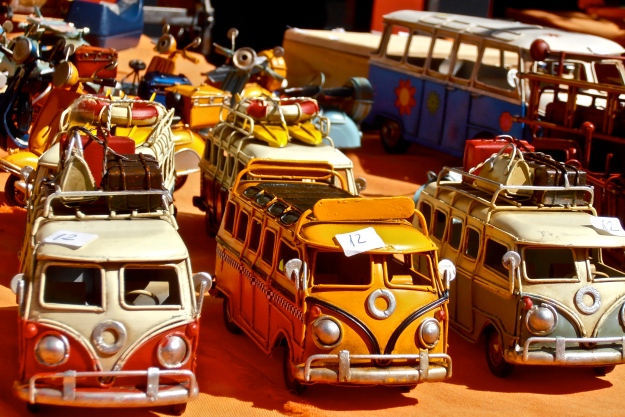 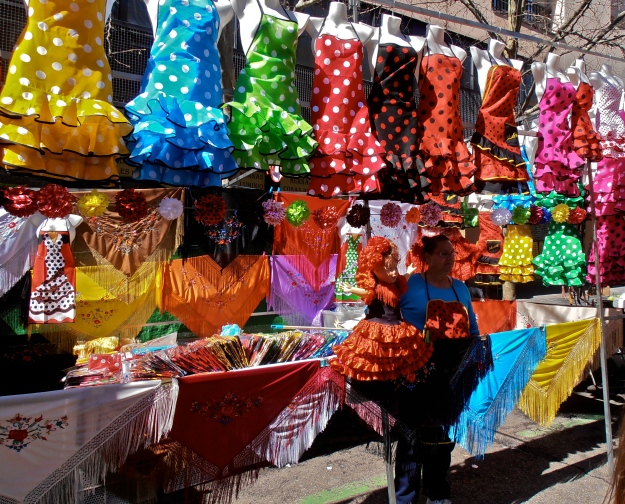 Eeeeeek… that’s me first thing in the morning!

The Rastro is fun, but what’s missing, in my opinion, is food stalls. In the UK or in Germany, they’d have filled this glaring gap (and quite a few ravenous punters) by now.

No matter. While waiting for a bunch of Maria’s friends to join us, we stumbled across an interesting restaurant not far off the market, serving ‘Peruvian fusion’ cuisine. We had to wait for ages to get a table outside, and the service was excruciatingly slow, but the food was worth waiting for. 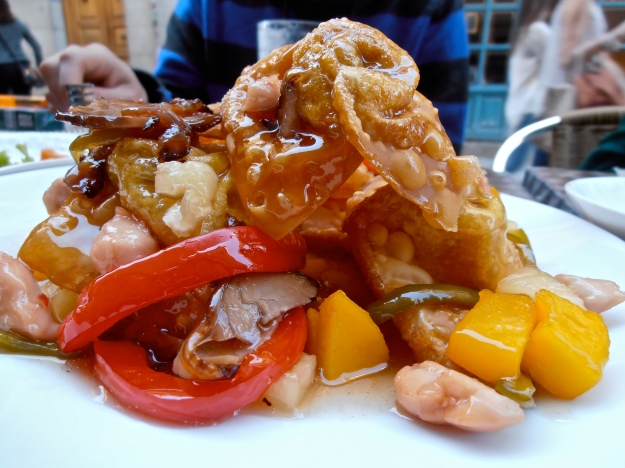 Deep-fried wontons with sweet and sour chicken, vegetables and mango. Definitely more “fusion” than “Peruvian”. Ten out of ten, though, for taste, and another ten out of ten for photogenicity 🙂 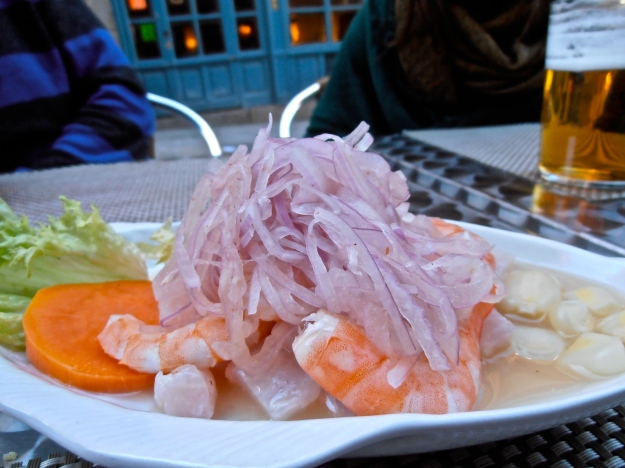 We absolutely had to order Peru’s signature dish, ceviche. You’ll find endless variations of this marinated fish and/or seafood dish all over Latin America. This one was delicious! 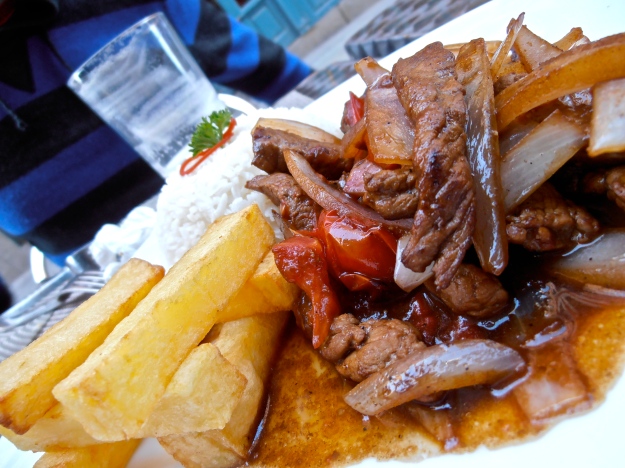 It sure was a colourful day 🙂