I’m worried that it’s too early to be doing this… too soon into a new relationship.

I know that some of you are getting on top of two, three or even four(!) at the same time, and I do wonder how people are managing this.

I moved to Spain primarily to get to grips with Spanish. I’d been studying the language before, for years, on and off, and I knew that I was never going to reach a (for me) satisfactory level of competence without actually going to live in a Spanish-speaking country.

So I did. And I put in a lot of effort to improve. For the first nine months, I took classes to plug the remaining grammar gaps. I listen to teaching podcasts every day, and to the radio, for hours and hours. I engage in 1-2-1 intercambios (language exchange) sessions with a number of people every week. I spend time with Spanish friends. I’ve just started reading novels in Spanish, which, thanks to the integrated dictionary on my Kindle, is going quite well. I’m not yet where I want to be with it – progress is a lot slower than I expected.

I’ve harboured an interest in Portuguese since my teenage years, and it was next up on my list of languages to tackle, but, to be honest, I’d rather have waited another year for my Spanish to solidify a bit more. However, an opportunity arose to go to Brazil for a few months with a friend at the end of this year. I don’t want to miss out, and I also want to get the most out of that experience, so I started learning Brazilian Portuguese a month ago, from zero.

Pronunciation is tricky. To stop it from sounding like Spanish, I figured, after watching a whole slew of podcasts on the matter, you have to speak like a 13-year-old Italian boy with a stonking cold whose voice is breaking. The fact that Portuguese is so close to Spanish is helpful and confusing all at the same time. 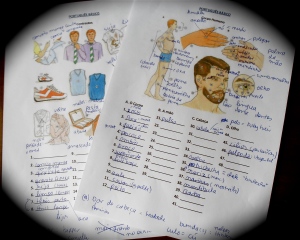 But grammar is grammar is grammar, in any language. Suddenly, I find myself once again filling in endless gaps on photocopied pages, requiring the right articles, pronouns, verb tenses. Because there is no other way, at least in the beginning. I’d only just left this phase behind me. (In Spanish.) It’s like the terrible twos all over again.

At the moment, I’m trying to do a bit of Portuguese each day, spending maybe between 20 minutes to an hour, and, overall, I am enjoying it … but…. I do feel terribly guilty for not investing that time in my Spanish instead. Even before starting on this new language, I felt that I wasn’t giving my Spanish the attention it deserved.That’s because I have to do other important stuff like work for a living, and for that, my head needs to be in English mode.

Any tips from anyone studying multiple languages at the same time…? At some point, I’d quite like to get back to my Japanese, which I abandoned four years ago… but that would be totally crazy, right?!?