“Everyone loves a wedding” – so went the first sentence of a post by one of my favourite bloggers, an intrepid self-sufficiency enthusiast braving the vagaries of the Lithuanian outback.  I guess I must be the only person in the world who can’t stand weddings.

Maybe weddings are a bit like cats – you either love them or you hate them. Or maybe weddings are like other people’s kids – if you want people to be nice to yours, you have to stop yourself from kicking theirs, however much you’re itching to test those steel-capped boots.

People certainly seem to be in love with their own weddings. Theirs are always superior to other people’s, because, so they will insist, “tacky component X” was omitted, and replaced by “über-unique” ingredient Y”.

This “tackiness factor” they so decidedly spurned could be just about anything: the much-maligned white meringue dress, garish flowers, crab cocktail appetisers, bubble-gum-pink bridesmaids’ outfits with puff sleeves, etc.

Same goes for ingredient Y. The only criteria is that the guests pretend to buy into Happy Couple’s assertions that nobody had ever thought of it before, and that they laud its originality forever after, whenever the topic of weddings comes up.

The whole thing reminds me of a German muesli company I came across some months ago, who lets its clients customise their own personal muesli from 80 different ingredients. According to the company, this results in 566 quadrillion possible product combination. Well, I don’t even know how many zeros are trailing behind that figure, but there’s one thing I do know: Muesli is muesli and a wedding is a wedding, whether you have orange lilies or pickled Scottish thistles as your table centrepiece. 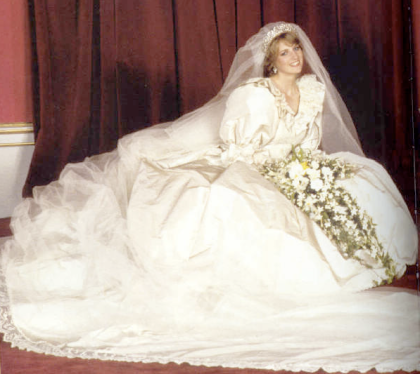 This was once considered the cutting edge of fashion. As was the dress. Both were sustained by hot air.

The instigating couple will usually insist that their Big Day is all about “spending time with their loved ones”, rather than the bride gliding up the aisle in her decidedly-not-tacky outfit with all eyes on her.

Let’s do a quick back-of-the-envelope calculation here. For the numerically challenged (and I wearily count myself among them), let’s assume there’s a total of 100 wedding guests. Half of these are the groom’s and half the bride’s, leaving each with 50.

But, let’s be honest – nobody really *loves*  all of the people they’ve invited to their wedding, do they? We are probably only fond of half of our family (and that’s being generous). As for friends, only about half attending a wedding will be actually be friends of the bride or groom, the remainder being made up of their friends’ other halves. In essence: 50% of the guests are just there to stop the other 50% from killing themselves.

Now we’re left with 25 “loved ones” on each side. But wait! Quite a few of these, maybe not half, but let’s say just over one third – are “political” guests, like bosses, work colleagues or other acquaintances, who’d be mortally offended if they hadn’t been invited and your life just wouldn’t  be worth living forever after.

The upshot is, any bride or groom will have warm fuzzy feelings for 15% of the people sipping their bubbly. But it’s not like they can spend any appreciable amounts of time with them. After all, they are duty-bound to “do the rounds” like a pair of frantic mayflies who’ve spent the last 23 hours idly sunning themselves on a lily pad.

I should, perhaps, mention at this point that I don’t just have an aversion to weddings – it’s big social gatherings in general. My wonkily engineered social skills circuits go into deep freeze mode when exposed to a stampeding multitude of more than four. You see, I don’t really have the standard-issue “group of friends” where everyone has known each other since they were knitting mittens in Mrs Meyer’s needlework class. And although some of my friendships go back decades, I don’t tend to know their other friends very well. Having moved towns and countries several times hasn’t helped.

This gets me into some abysmal situations. Some twelve years ago, I attended (under duress!!!) the wedding of a friend from Uni. It was a mercy mission – she was new to the UK, so her local social circle was very small, so I felt obliged to “make up the numbers”. I didn’t know anyone at the wedding but her. And – horror of horrors! – I ended up on the leper colony equivalent for social outcasts: The Singles Table. Oh Dear Lord. I found myself wedged between Dreary Banker and ER Doctor, who needed to broadcast his professional superhero status to all and sundry. If only the Happy Couple had known back then that their wedded bliss would last a mere smidgen longer than my Singles Table ordeal… but that’s another story.

I have to concede, from the average guest’s point of view, that, if the food is good (and that’s a big IF), if there’s a bunch of good old friends to chat to, and if they enjoy drinking as much as Rod Stewart is bound to enjoy an all-female nudist resort in Sweden, I can see how the event would go down as a fun day out.

But if ever you happen to spot me at a wedding – and the likelihood is about as high as Halley’s comet coinciding with a solar eclipse during the leap year when the Middle East Peace Treaty is signed – I just want you to know that I’m inwardly reciting to myself that “this, too, shall pass” 566 quadrillion times.