When you move country, the first thing you’ve got to occupy yourself with is finding those people (and services) without whom your daily existence would be a living hell. For example:

I thought my move to Central Spain a few years ago was a brush stroke of genius on the follicular front. It is a dry region. Unlike North London. Those with curly hair will understand. 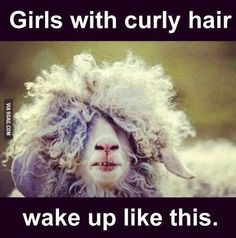 Remember this one going round on fb? = ME AT 7AM!

Shortly after my arrival, I stumbled into a nearby hairdressers called “Diseños” (Designs). Sounded like a creative sort of a place, I thought, and the fact that La Friseuse in attendance was close to my own age and also sported curly hair, gave me hope. I’m gullible like that. I imagined her channelling her creative juices into giving me a flattering cut that would, perhaps, make my witch’s chin stick out a bit less.

But no. My veteran Figarette happened to be of those people, who had figured out their solution to their hair troubles, and that would just have to do for everybody else. She herself had resorted to straightjacketing her wiry mop into a rectangular shape, which kind of suited her, but sometimes, one glove does not fit all.

This pretty much illustrates the result. And also my facial expression post-“redesign”. (Just imagine a sticky-out chin instead of a snout.)

Since I don’t really care for having a square head – I’m already German, let’s not forget – and adding the fact that the salon’s “design” component referred more to its prices than the craftsmanship, I went in search of a new chop shop as soon as my rebel locks had managed to break free from their cuboid confines.

This time, I asked about the price first. Twelve bucks, I was told, and one can’t argue with that. In North London, you wouldn’t even get a drunk on the Tube to drool on your head for that. Like I said, I’m gullible.

Now, haircare professionals do have a bit of a reputation for enthralling their captive audiences with tales of their all-inclusive summer break at CattleProd Resorts, but THIS was something else.

If you are acquainted with British English, you may have heard the expression “talking the hind leg off a donkey” – a disparaging reference to a tedious person’s excessive loquaciousness. At forty minutes in, I was very nearly at the point of fearing that my extremities would drop off due to necrotic tissue damage induced by the most inane of moronic monologues I had ever been subjected to in my entire life.

But the ceaseless chatter wasn’t the worst part. What really drove me to distraction was that the girl would stop short after every snip in order to accompany her onerous outpourings with wild gesticulations. At one point, überchatty scissor sister was exposing all the parts of her body to me which had ever been nibbled on by a mosquito. Don’t ask me how we got there. I can only assume that those bloodsucking creatures are, in fact, totally soundproof.

No, I told her, a blow dry really wasn’t necessary. Yes, I was aware that it was the midst of winter, but putting on my woolly hat would probably stop my dripping fringe from freezing to my eyebrows on my way home, and I’d see myself out, thank you very much.

On my second visit, it was the owner who cut my hair. (I had made sure he was holding the fort all by himself after peering through the window at a stealth angle). He was pleasant, professional, and, above all, soothingly SILENT. I was in and out of there in twelve minutes flat. INCLUDING a blow dry. An 87% time saving on my first visit. And the cut was good.

This week, it was high time to excise the felt mats once again, and so when I walked past the salon on Tuesday afternoon and found it empty but open, I  decided to seize the opportunity. I wish I hadn’t. As soon as I entered, I spotted her, slithering out from behind the spiral staircase. Miss Verborrhoea.

As she led me to the washbasin, I felt my eardrums tighten in anticipation. So far, she’d not actually uttered anything besides standard salon protocol. Maybe she’d been on speed last time, and had sworn off it since then.

All was well for about five more minutes, until she suddenly stopped working the warm lather into my pelt. Did I mind if she nipped off to the toilet for a second, the water tablets her doctor had prescribed made her want to pee every five minutes.

Did I enquire, with a caring look on my face, what terrible affliction would require such a sprightly 20-year-old to be popping diuretics? You bet I did not. But I would find out. In excruciating detail.

Thank heavens it’s still summer here in Spain. My hair dried in an instant as I shot through the door into freedom at supersonic speed an interminable hour later.