All good things come to an end. After nearly a month in glorious Key West being pampered by my friends, I’ve crashed back down onto the cold hard Earth that is wintry central Spain. The 20 degrees temperature difference sure feels a tad harsh to my overtired, travel weary body right now 😦

As much as the return journey sucked by virtue of being, well, a return journey, approaching London, we were greeted by this stunning sunrise, served on a bed of whipped cream clouds: 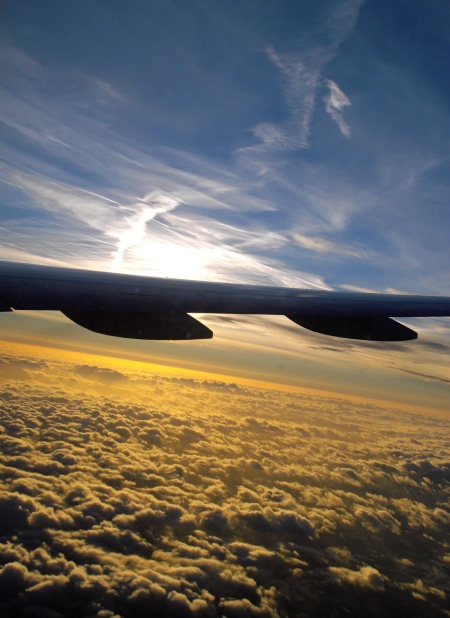 It’s always a huge relief when, after two plane changes, your bleary eyes catch sight of your luggage jittering towards you on the conveyor belt. Mine had an interesting tag on it: 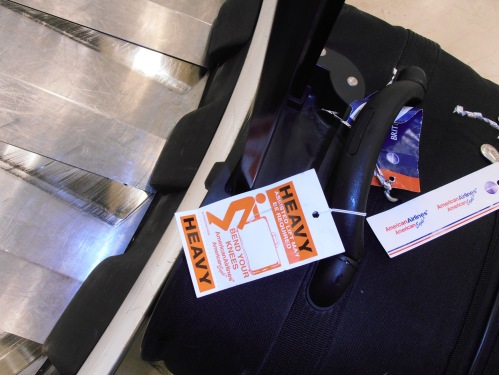 My long-suffering suitcase has officially been declared a health hazard. Evidently, I wasn’t the only one who’d been piling on the pounds on this sojourn!

When I arrived in Key West on January 8th, my bag was about two thirds full, weighing 36lbs. This included a contraband 4-pound Manchego cheese, which my friends managed to gobble up with gusto in two weeks flat.

I was sooo determined not to overdo it with the shopping this time. All I actually needed was some sensible underwear (very cheap in the US!), which weighs just about as much as a bag of cotton balls, right?! It dawned on me that I’d failed in my mission when I was trying to cram all the accumulated junk into my straining suitcase an hour before my departure.

When I plonked the lumpy bloater down at the check-in counter,  the scales groaned under a succulent 53lbs. How did this happen?!? Luckily, Key West is one of the most laid-back places on Earth, and the nice man didn’t charge me for the excess. Phew!

No, it’s not a giant floating haggis, but a 9ft manatee feeding by my friends’ neighbours’ houseboat a couple of days ago.

I really need to go to bed…